John Stowell from the Cincinnati Magazine published an article on March 15 about Cincinnati's certification as a 2030 District and Donovan Energy weighed in on making the city more sustainable.

When Ed Mazria, one of America’s most notable architects, presented data more than a decade ago showing that roughly 50 percent of a city’s greenhouse gas emissions come from buildings, not cars, buses, and trucks, well, the architectural world was turned upside down. “We are trained as architects to make our buildings a better place for the health and the safety of their occupants,” notes Chad Edwards, a principal at emersion DESIGN. “So Ed’s presentation sent shock waves through our industry. We realized we had to fix this.”

That “fix” is now arriving in Cincinnati. In late December, our downtown was certified as the nation’s 21st urban core committed to become a so-called 2030 District. That means building owners, managers, and tenants who agree to participate pledge to cut their energy use, water consumption, and transportation footprint in half over the next decade-plus. They’ll also develop a plan to promote healthier workplaces with the goal of improving each building’s indoor air quality.

The article went on to quote Andy Holzhauser from our team.

“You know, I don’t think people, even in our own community, understand what a leader Cincinnati is in environmental sustainability,” says Andy Holzhauser, a long-time leader in the region’s energy and environmental community. Holzhauser, a partner at Donovan Energy, is the new president of Green Umbrella. “No one tells the story holistically, but I think the 2030 plan can pull the threads together and tell the story of Cincinnati’s leadership.”

Tim Donovan weighed in as well

Tim Donovan, founder and partner at Donovan Energy, sees a city bathed in quick-charging electric charging stations in public garages, shopping center parking lots, hospitals, libraries, and even on the street. He sees the electric vehicle market on the cusp of rapid growth, particularly as the major car manufacturers race to produce more affordable cars and SUVs. “The one millionth electric vehicle was sold last July,” Donovan says, “and the growth rate is running at 40 percent. Tesla sold 33 percent more electric cars in the fourth quarter of 2018 than Toyota sold Corollas. Our problem now is that the cars have superseded the infrastructure we have to charge them.”

Donovan, whose company installed eight two-port charging stations in the new downtown Kroger garage in January as construction workers hammered above, looks forward to the day when gawkers will no longer see these stations as novelties but instead wonder if the owner of that Nissan Leaf is buying power or selling it. 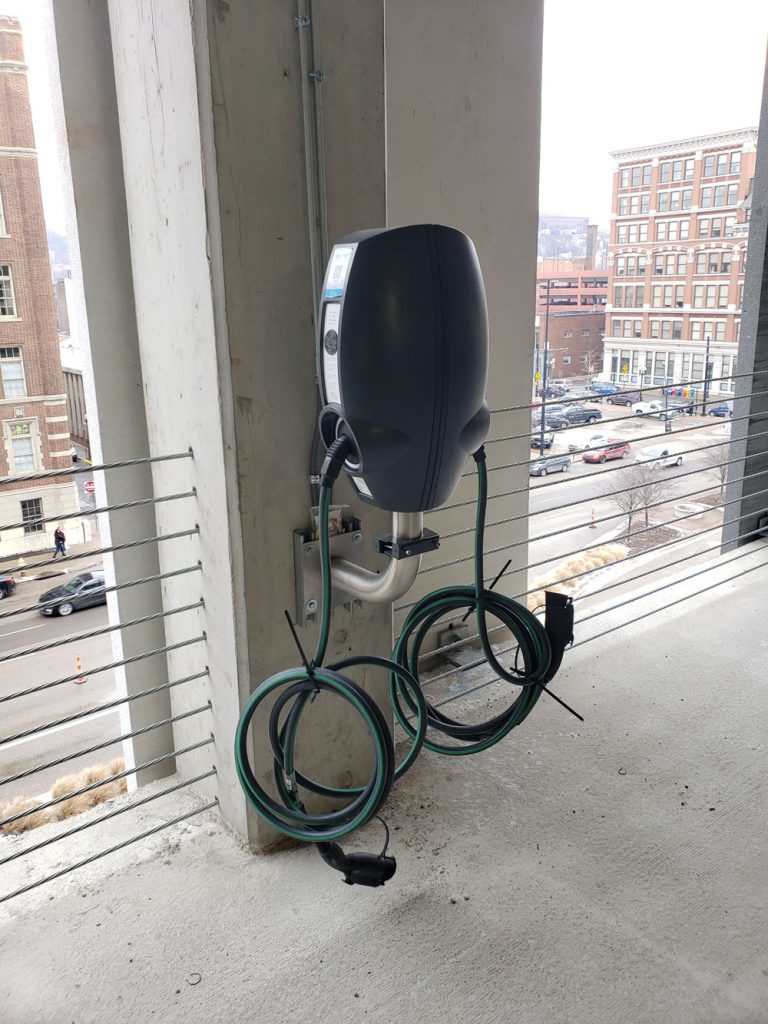 Yes, your car could become a mini power plant, because that port can work both ways. Let’s imagine your car is fully charged but you need only a quarter of a tank of electrons to run all of your errands. You check your phone and discover Duke is buying power right now at 14 cents per kilowatt hour. You know electricity will be cheaper after 10 p.m., so, while you’re inside the Kroger store, you hook up to the charging station and sell half your tank; you then recharge at home that night when the price is down to 9 cents. You made a profit, and maybe paid for that impulse grocery buy.

Donovan thinks school districts could be a great beneficiary of this strategy. “School buses run, what, five hours a day? When they’re not running, they could be a giant battery system that takes or receives power and, if it’s done right, make a profit for the school district.”

One day, might you see a driverless car pull up to an electric vehicle charging station near Fountain Square and watch its automated arm snake out the back and plug in for a quick charge? Donovan thinks so, and says Cincinnati 2030 can accelerate the deployment of these developing technologies.

With the federal government either denying climate change science or sitting silently by, the business community has carried the innovation fight forward as much for economic and brand-enhancement reasons as environmental. Cincinnati 2030 is a private-public partnership, not the other way around. But Mayor John Cranley is on board and isn’t shy about saying he’s focused on the environment.